Refurbishment Of The Lyric Theatre

Following an intensive six years planning and fundraising, West London’s largest theatre, Lyric Theatre, is undergoing a massive development as part of its Capital Project. Demand for change is driven by the theatre’s importance locally and internationally. As Lyric’s Executive Director, Jessica Hepburn, outlines, ‘We produce and present a programme of contemporary theatre for audiences of all ages and run a wide-ranging programme of classes, projects and training for children and young people’.

Development plans include new drama, dance, film and TV recording studios. Additionally, a 60-seat cinema and a new bar and café will also be installed. As well as building a large extension to the west of the theatre, Lyric will also be giving its existing theatre building its first major facelift in 30 years.

Matching its reputation for ground breaking stage shows, the Lyric Theatre is continuing to break ground with its redevelopment plans which include a Green Roof, reclaimed furniture, and is almost completely lit by LED lighting. Lyric is the first ever theatre awarded with the highest star rating under the Industry Green certification scheme, which measures sustainability achievements across four key areas; commitment, understanding, improvement and communication. 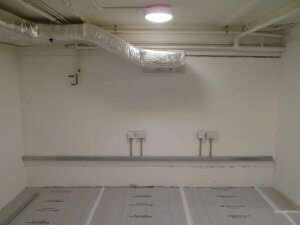 Office Profile successfully delivered the first phase of a major refit within budget. Bespoke fitted furniture was manufactured in the UK and installed in the theatre’s back room areas, including dressing rooms and staff breakout room. Furniture was created through upcycling and recycling environmentally friendly finishes to match Lyric’s brief and the theme of this unique build. 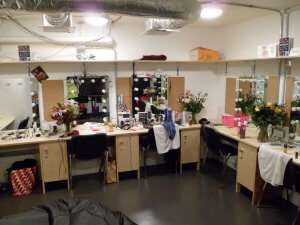 We would love to hear from you about your fit-out project! Give us a call, send an email or use the form below, we are always keen to share our expertise and answer your questions.

Send us a message